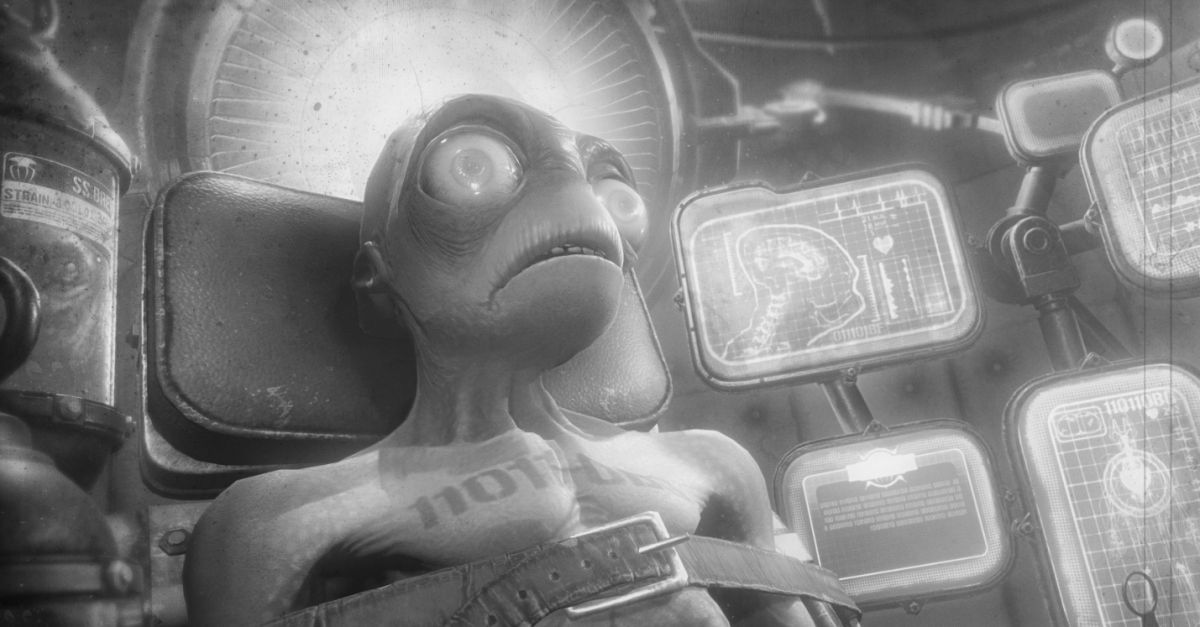 Following its original four game-spanning run which concluded in 2005, Oddworld Inhabitants revived its flagship Abe’s Odyssey series in 2014. Under the banner New ‘n’ Tasty, the founding developer partnered with UK outfit Just Add Water to reimagine the ’97 original—and in turn introduced a new generation to endearing Mudokon protagonist Abe and his plight for freedom.

Announced last year, Oddworld: Soulstorm marks the series’ next instalment, which promises an “all-new” Abe and a darker, more mature narrative. I caught up with Oddworld’s Peter Chapman to discuss its premise, its ongoing community ARG, and what we can expect from Abe’s next, more sinister outing.

Oddworld Inhabitants Oddworld Inhabitants was formed in 1994 by special effects and computer animation specialists Lorne Lanning and Sherry McKenna. Its first game Oddworld: Abe’s Oddysee came in ’97 and marked the beginning of a four-game series which was revived in 2014. Oddworld: Soulstorm is its next venture, due at some stage this year, which takes the series in a more mature direction.

PC Gamer: Oddworld: Soulstorm is being co-developed across Oddworld’s UK and California teams, and in conjunction with Quebec’s Frima Studios—is Just Add Water involved again this time and how has the division of labour been split between the studios?

Peter Chapman: Oddworld Inhabitants now operates in a very distributed way. We work with people we can be sure are doing great work for us, in the areas that they specialise in. Some key figures in New ‘n’ Tasty’s development are now working on art and level design. We’re also working with independent designers, artists and developers around the world that are doing some really exciting work for us that we can’t wait to share.

How similar is Soulstorm’s tale to that of 1998’s Abe’s Exoddus, and what can you tell me about its story and premise in general?

Soulstorm is a brand new game. I think some people are perhaps expecting some kind of remake but it’s definitely much bigger than that. We are telling the story of what happened with Abe after the events of New ‘n’ Tasty, so we are going to see some settings and perhaps some of the wider story elements that might be familiar to those that have a deep understanding of our older games.

Can players expect new features and abilities in Soulstorm?

Yes, absolutely. Abe is learning new tricks and abilities but the world around him is changing too. Not just because he’s visiting new places now he’s out of the factory and its surrounding areas but because his actions in New ‘n’ Tasty have started to have a knock-on effect in the communities around him and that changing world requires the development of a much wider range of abilities than Abe has ever had before.

When Soulstorm was revealed, Oddworld co-founder and president Lorne Lanning said it will be a “much heavier trip” for Abe—what more can you tell me about this?

If you put yourself in Abe’s position, at the end of New ‘n’ Tasty, you might be thinking, “hey, I did it, I’m a hero now and that’s my hard work done.” Maybe you’d put your feet up and bask in the glory. But Abe has to contend with a newly freed mob that are thrust into a world where they don’t really know how to function. Maybe there’s an element of resentment too—they might have been slaves before but at least they knew their place in the world.

Abe has all of that to contend with and he’s now more widely known to the authorities too, so security is going to be tighter. The situation within Mudokon society is more fraught with peril as their bosses are much more vigilant against any kind of dissent and they’re all hearing stories of their kind being liberated by this strange guy with the stitched up lips. And then there are the other dangers in this world that has been overrun by corporate interests, at the expense of almost everything else. It’s not going to be a picnic, that’s for sure.

Lorne Lanning also said: “There was a deeper, darker, and more sinister story that we never got to tell”—what more can you tell me about this?

Well, the success of Abe’s Oddysee meant that the demand for a sequel was high and the time to deliver that sequel was less than ideal. Abe’s Exoddus was made in about nine months and, because of that time pressure, a lot of corners had to be cut with what we wanted to put into the story and how we wanted to tell it so that we could still make a great game.

We don’t have those time pressures now and technology has come a long way so we’re going back to the well on all those great ideas Lorne had that it just wasn’t possible to fully explore back then. Some of the ideas we’ve been working with range from creepy to downright disturbing.

This isn’t just a darker story than we’ve been able to tell, it goes places that I don’t think I’ve ever seen any game go before. I hope it all makes it into the final game because, honestly, I can’t wait to see the reaction from our fans.

What have been the biggest challenges of returning to a series now 20 years old?

Taking a character that so many people have such a deep affection for and knowing that everything we do with him is going to be scrutinised by the fans that have grown up with him. Since the character of Abe was created, he’s been adopted by so many wonderful fans around the world. We know we’ve got a lot of responsibility in making sure his adventures continue in a way that is faithful to the character and in keeping with what those familiar with him would expect.

What’s been most enjoyable?

Probably exactly the same thing! Being able to revisit this character and exploring what directions his life took and how he might react to new challenges is something very few creators get to do in the games industry. For many of the team, working with this character is a slightly surreal experience because they remember first encountering him as a fan when they were children and now they get a say in how his life unfolds.

Are any of the original team still around today?

Many of the team that worked on the first couple of games have had very successful careers in the industry and beyond but Oddworld Inhabitants is a somewhat differently distributed company than it was back then. We still have Lorne Lanning and Sherry McKenna, of course, and we still regularly talk to and hear from people we’ve worked with throughout the intervening 23 years.

It could be argued fans of the original are already sold on the idea, but how do you attract newcomers who either didn’t play the first time, or weren’t born in the late ’90s?

You make sure the idea is an attractive one and you do everything you can to make sure you act on that idea to create a game that the whole team can be proud of. We’ve always felt we held ourselves to the highest possible standards and we’re so proud to see that feeling vindicated by the great reception our fans give our games. First and foremost, it’s all about making a great game.

Of course, the messaging is important too. We have to try to get as many eyes on what we’re doing as possible. In the past, that would have meant relying on a publishing partner’s marketing budget but now we have many more opportunities to reach out directly to our audience. That’s why we value the relationships we have with people like you and your publications, as well as the new wave of influencers that are carving a path via platforms like YouTube and Twitch.

Social media is a key element in our marketing plan because it allows us to talk to the people that play our games and hear their stories. It allows us to extend that reach to people who might be interested in our games but have never had the opportunity to play them and it allows us to keep exploring what our audience likes about Oddworld and what they want to share with their friends.

Marketing games at this level has really become much more of a social event than it ever was before and optimising how we approach that is something we see as key to our future.

I’ve been following the Soulstorm ARG. Tell me as much as you can about that—when it was conceived, how it’s been received by prospective players etc.

I think really it was born out of two things. Firstly, we know it takes a while to make games and that, for much of that process, fans don’t really have anything to do. They just have to wait for a trailer or some screenshots and see what the end result is going to be. Then they have to wait a while longer for another trailer, maybe a gameplay demonstration and some more screenshots. Then, they wait for it to become available for them to play and see how it all turned out.

The second thing that led to the ARG was that we were hearing a lot of people tell us that our world is rich and deep with lore and they just wanted to know more of what was going on around the situations we see in the games. Lorne wanted a way to keep our audience engaged and rewarded while we were making a game which might be 12 months or more away. He didn’t want to just announce a game and then disappear until we had that first teaser trailer.

So we started passing ideas around until we hit on a situation and cast of characters that we thought would inform and excite fans about what they would eventually get to see in Soulstorm. The ARG is really just a way of giving our audience something to do while they learn about what the essence of Soulstorm is and, we sincerely hope, get excited for its release.

ARGs are relatively common nowadays, but probably wouldn’t have been possible when the Oddworld series started out. How different is preparing for a game in the advent of social media?

Honestly, it’s fantastic. We’re getting constant feedback on everything we put out there and it inspires the whole team to do even greater work. The ARG has been a great motivator of our community, who seem to really be digging the experience of solving the mysteries, deciphering messages and figuring out what’s going on—all while discussing their hopes and expectations for the game. But it’s more than that, it’s a great motivator for us, too. Seeing how invested the community is in playing along and, of course, seeing their reactions to the horrifying images they discover is something that the whole team takes motivation from.

When can we expect to learn more about Soulstorm?

If you’re playing along with the ARG, you’ll be constantly learning more about Soulstorm as you go! We haven’t announced any additional reveal plans yet but we’re hoping that we’ll be able to share a lot more with you soon. Our Facebook, Twitter and Instagram accounts are a great place to check in and make sure you’re first in line for seeing all of that, whenever we are ready to share.