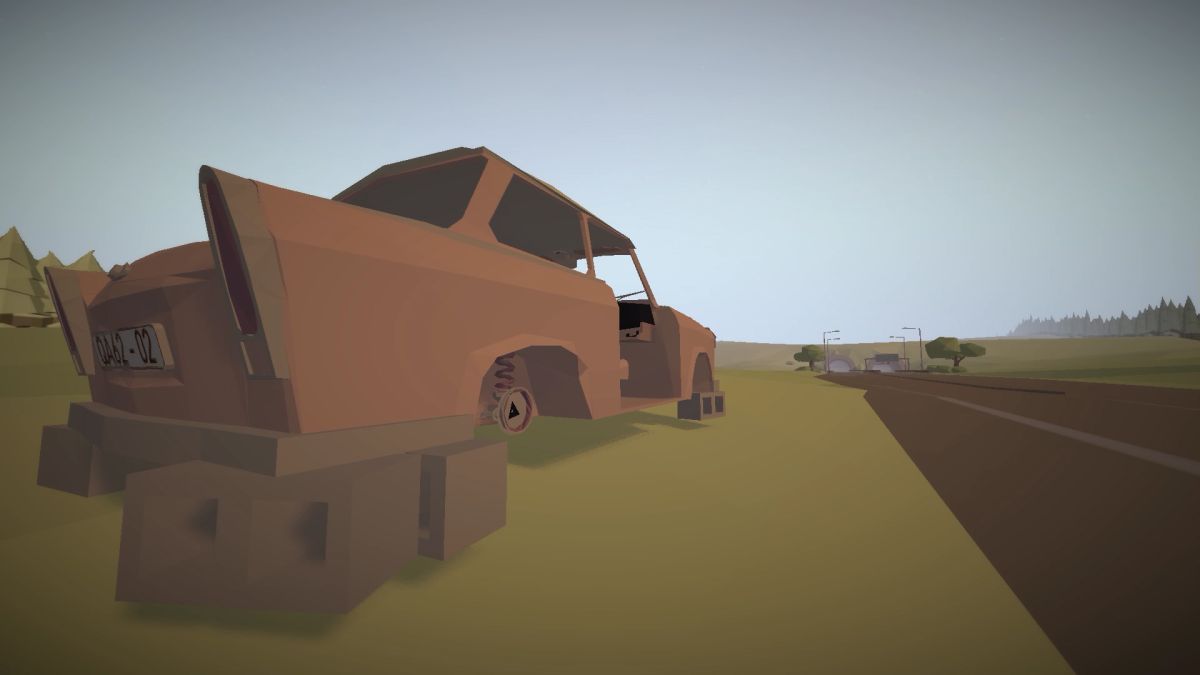 I grew up in ’90s Yugoslavia, an Eastern European country that no longer exists. The year I was born, my family bought a Yugo—a metal box with wheels that was the embodiment of cheap communist cars. Against all odds, it managed to survive for 27 years. Its tenacity and stubbornness is a testament to the sort of absurdity that Jalopy, a lo-fi Eastern Bloc road-trip sim, attempts to recapture.

In the game, I’m introduced to my new car, the Laika 601 Deluxe. I have to put in the engine parts, tyres and a new door. But it will run, I’m assured. The end goal of Jalopy is to reach Turkey, but I have my own mission in mind: to go back to Yugoslavia.

As I drive through procedural ’90s Germany, I don’t recognise any of the environments, but I still feel a sense of nostalgia. My car is slow and the roads are barren, without a single billboard in sight. The radio plays songs that sound like Eastern Europe in the ’90s, (or Western Europe in the ’60s, depending on your perspective). A few infant ’90s tracks tentatively edge themselves in, not yet knowing whether they’re electro or industrial.

After having to repair my engine twice, I no longer have the tools to do it a third time. Thankfully, a gas station is nearby. The turn from the freeway takes me through several twists until I finally reach the station in the middle of a forest. There’s gas, and a few tyres, but no tools. I wonder to myself what kind of gas station doesn’t have spare tools, but as I throw another glance at the store, I notice there really isn’t much of anything. The shelves are mostly empty, and the only thing that’s cheap is gas. I’m reminded of the phrase “waiting in line for bread”, when even getting something as basic as a loaf was a matter of uncertainty.

As I drive on, my engine still lets out puffs of smoke. I turn up the radio and ignore them. Somehow, I make it to the next town and pull off the necessary repairs. The brutalist architecture, the lack of life and the same almost empty stores unnerve me. I spend the night in a motel without a working toilet, then make my way across the Czech and Slovak Federative Republic.

The rest of my journey is plagued by broken bridges, puddles, flat tyres and other inconveniences, but I prefer the open road to civilisation. I’d rather deal with a broken car than broken human beings. I come across several crates that probably fell off the back of a truck. Cigarettes, wine and medication go for a lot of money, but my fortune is short lived as the Laika eats it all up in the form of upgrades.

When I finally reach Yugoslavia, the game shows off the coastal area—something I’ve never seen before. But the roads still feel familiar. They bend in weird and dangerous ways, while stone hills loom over them. It’s nowhere in Yugoslavia; it’s everywhere in Yugoslavia. I gaze at the sea and reflect upon my journey. Have I changed like my Laika has? Different on the inside, with only the shell still the same? The car breaks down again and I’m reminded that no, it’s still the piece of garbage it has always been.